And why is this game mentioned so much on Twitter and Reddit ? Because Greenheart have put online a fake "pirated" version of the game, in which the player loses due to "piracy". 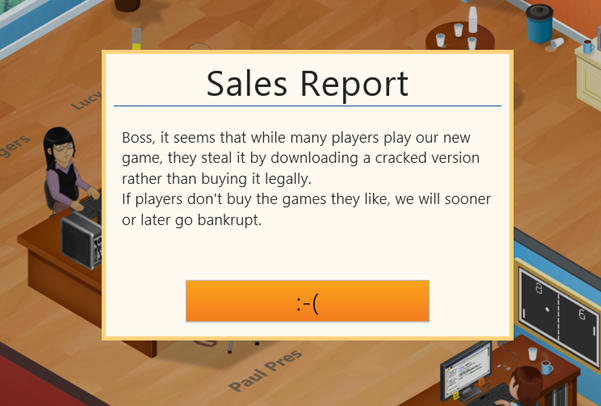 On their blog, they have published the tale of their little "experiment" : What happens when pirates play a game development simulator and then go bankrupt because of piracy? : On the day of the official release of the game, they shared the fake version, and estimate that, after one day, 9 out of 10 players used the free version rather than the paid one.

This small independent outfit, unknown just a few days ago, seem to be really angry at some aspects of the gaming world, such as social and "free-to-play" games, the likes of which are legion on Facebook, and "piracy", once again considered as theft.

Anyways, I find it interesting that on the Internet, everything follows the fremium model, whether the publishers want to or not.

1. le 02 juin 2013 (17 h 37), par perry :
Does your blog have a contact page? I'm having problems locating it but, I'd like to send you an e-mail. I've got some recommendations for your blog you might be interested in hearing. Either way, great blog and I look forward to seeing it grow over time.