I've never followed Ryan North’s “Dinosaur Comics”, a webcomic where the images do not change. In 2005 Ryan gets this idea : 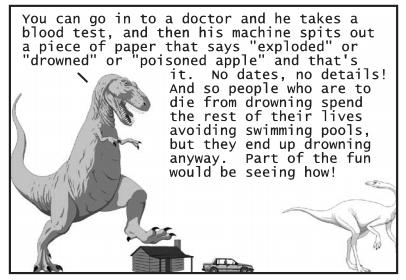 After this, Ryan North, Matthew Bennardo, and David Malki got together and asked for short stories on that theme, a machine that could predict the way people would die. They got over 700 submissions (!), and have selected a few to be in this anthology, Machine of Death. 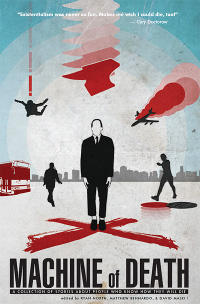 Each author explores the idea in his own way, from ironic death to people trying to avoid their fate. One of the stories, “Exploded”, by Tom Francis is simply amazing, and deals with the inventors/discovers of the machine, that get insanely rich but have to live in hiding for the rest of their lives. Other authors have thought about the social implications of such a device, from the government trying to avoid catastrophes, to teenagers making the pecking order in high school a function of the way they're going to die.

Would you do it ? The curiosity would be killing me, but the fact that the prediction are extremely vague (on purpose ?) would be a detterent for me.

The book is also available as an eBook, and as a DRM-free pdf, on their website machineofdeath.net. And the concept is so popular that a second volume and a board game are on their way, and you can buy your own set of death cards :).

The board game is on Kickstarter, 25 days to go !