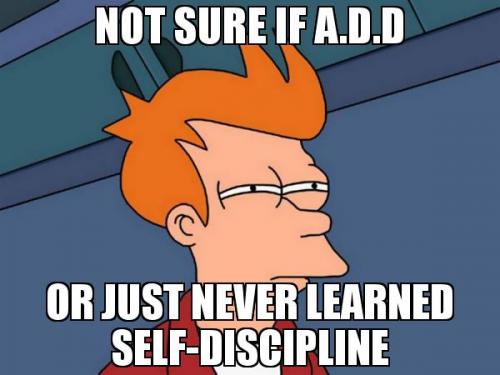 I have been depressed for a long time, but today I don't feel "sad", I just have a hard time focusing on the task at hand, and finishing the ton of projects I start. My "flow" is very fragile, it only takes someone talking to distract me. My doctor thinks it could be adult ADD, or Attention Deficit Disorder, so he gave me some drugs to try.

It was a challenge just to get the drugs, as in France you need to see a doctor in an hospital to get the good stuff ; it's used by junkies and students, to stay awake for long periods of time.

Knowing that, I thought it was going to be amazing, like something out of Limitless. What a letdown ! The stuff doesn't do much, I had a lot of energy the first day, but that's about it. i still have a hard time concentrating on a single conversation at parties, and still spend time on tumblr/facebook/twitter/reddit/dribbble. Well, I guess it is getting a little bit better, but I was hoping for something spectacular.

Drugs are fun, but I think getting a girlfriend would help me as much :)

Girlfriends are not known to help focusing on something other than them ;).

I guess you need to disconnect from social media when you want to focus on something !