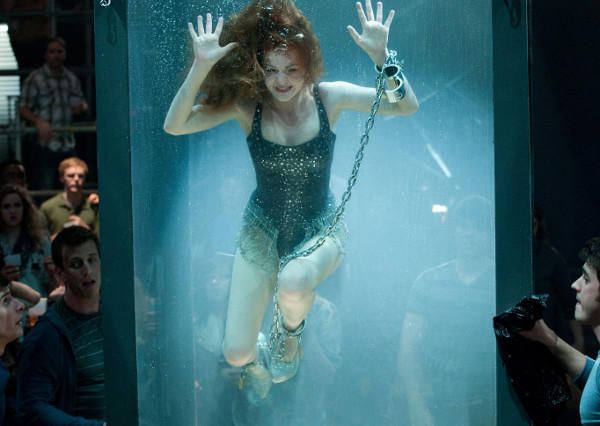 Now You See Me, by Louis Leterrier 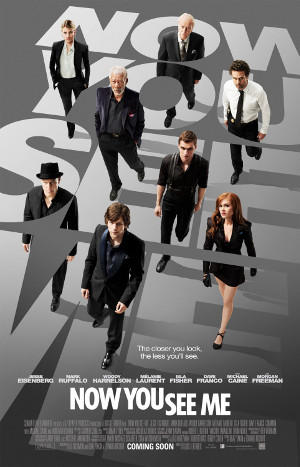 I don't get it. A few friends told me to go see that movie, so I went to the theater thinking I was about to have fun. I didn't know anything about the story, since I didn't watch a trailer or even who were the actors. When the lights came back on, I was wondering if I had misremember the title, and seen the wrong movie.

I won't say too much about the story for now, I'll put a warning before the spoilers start.

Visually, the movie is amazing, you'll be dazzled (or is it blinded?). Now You See Me tells the story of 4 magicians, who start committing thefts during their performances. At first I thought that concept was great : The police would have to either find how they did it, or say that it really was "magic". Unfortunately, after that interesting setup, everything goes to hell.

At the beginning, we don't know if this movie is in the realm of fantasy, and makes use of "real magic", but the first performance they do is explained, which asserts that they really use tricks. But then, nothing else is explained, which really seems cheap from the writers. How did they do that? Magic! Wait, that guy did not see them? Magic! How did they steal that? Magic! Why did this guy helped? Hypnosis!

By the way, the hypnosis/mentalist of the group is so powerful, that we wonder why he isn't ruler of the world. He can make anyone do anything, like putting the driver of an armored cat to sleep, from a distance, or erase people's memories.

The film is full of plot twists, just like movie classics such as 1998's Wild Things. While it is fun for the audience to discover that so and so was actually someone else, when it happens every 10 minutes the story becomes a complete mess, and every twist breeds more plot holes. When a movie is already abusing the magic deus ex machina, it's a bit much.

This movie also features a lot of cliched arguments in favor of the mysterious, the invisible, as if saying that "there are things that we don't know" was any sort of proof in favor of magic, ghosts, or who-knows-what. That is not really a problem in the plot, just a pet peeve of mine.

The actors are amazing, even if I found Jesse Eisenberg doing a very similar character than in The Social Network.

The four magicians were doing all that to join a secret society, The Eye. Yet at the end, we learn that all this was arranged by the FBI agent chasing them, who is actually the son of another magician, seeking revenge. We get two explanations at the same time : Is the FBI agent part of The Eye? Is he the leader, or just in charge of recruiting ? No one knows.
The FBI in this movie is portrayed as a bunch of complete imbeciles, to the point that I wonder if the directors had a bone to pick with them. One agent doesn't notice that his phone is taped, the surveillance team at the second performance goes to chase the suspects on foot, leaving no one in the van, plus the use exclusively a localization signal they got from the magicians themselves. Sure, let's use information that the adversary gives me, especially when it is established and expected that the four use manipulation and diversion techniques.

The film is full of TV series tropes, such as showing back on screen something that happened earlier, which is more suitable to a TV audience, that may have missed the beginning. When the FBI leaves the surveillance van, we get a zoom on the lock, a clever and discreet way of saying LOOK THEY HAVE CLOSED THE DOOR IT IS IMPORTANT.

As for clichés, we have them all. Get your bingo card out, you'll have a complete line.

None of the explanations given for the magic tricks or the many plot twists make any sense. When one of the four is killed in a car accident after a chase, we learn that, actually:

Let's recap. We are told that there was a car stuck to the front of a city bus, with a corpse at the wheel, and nobody saw anything. In dense traffic, broad daylight, with a news chopper filming the whole thing, a point that the movie really insists.

So I come back to what I wrote when I started this: I don't get it. There can't be so many giant plot holes, I must have missed something!

I think that the enjoyment of a heist movie, such as Ocean's 11, comes from being told the trick, the clever technique that the thieves used. It's not the easiest script to write, since it is all about craftiness, manipulation and (some) plot twists. Here, everything is done in excess and cheaply, as all is explained with a "magic!". They should have gone completely in the direction of "real magic", with incantations and spells, it would have been more believable.

For all these reasons, I give this movie a grade of :