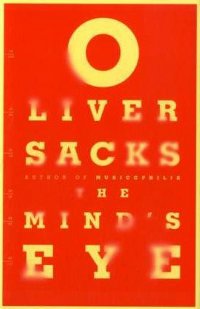 Like Oliver Sacks' other books, this is a series of account of patients that he met. The book focuses on the various psychiatric problems that can occur, related to vision. Every single part of the visual process can go haywire and is independent; One of the cases is about someone loosing their ability to read, yet keep being able to write!

That is, by the way, called "alexia sine agraphia". This book is full of vocabulary, such as visual agnosia, prosopagnosia, or topogrophical agnosia. There are even some fun invented words for the dialogue that goes on inside one's mind : "interlingua" and "mentalese" :).

People can loose any part of the "processing" of data coming from the eyes. Some lose stereo vision, having to resort to other clues to get a sense of the 3D world we live in.

A very interesting tale in the book is one of "face blindness", that is people who are not able to remember the faces of the people they meet. The author compares it to dyslexia, a disorder that a lot of people have, at various degrees. The chapter mentions that some people have the opposite of "face blindness", and are able to recognize people they have met only for a few minutes.

Dr Sacks himself is featured in one of the stories, having lost part of the vision in one eye, due to cancer. I was amazed to learn that in such a case, the brain tries to fill in the missing part of the field of vision, with hallucinations or patterns.

Obviously, the worst thing that can happen to your vision is losing it. There are five different accounts of total blindness, no one seem to experience it the same way ; some lose their "visual thinking", while others use it even more, another had synesthesia before losing his sight (synesthesia is only mentioned in passing, but you can read a chapter on it "Musicophilia", by the same author).

Even with blindness, some people keep having "visual" dreams; It seems that the brain can't really tell what is visual, tactile, etc, once it is "processed", so that the visual processing parts of the brain can still be active, even when the eyes do not function anymore.

By the way, this book's cover was designed by Chip Kidd, which was a speaker at TED 2012, the video is online over here: "Chip Kidd: Designing books is no laughing matter. OK, it is."