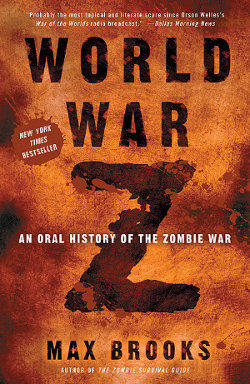 I really like the zombie theme in games, you may have noticed it :) Howerver, I had never read any fiction on that theme.

We follow, in horror, the way the epidemic evolves and keep getting bigger and bigger worldwide, without anyone understanding the danger, except for a few wary individuals.

The ranks of the army of the dead keep growing, until "the great panic", when everyone realises, much too late, the danger.

Can the world survive this new world war ? Will humans emerge stronger from it, or will their faults render them extinct ? World War Z is a book that you do not want to put down until you've finished it.

If I had to make a criticism, it would have to be about the part taking place in France, where the protagonist is named "Emil", and his war cry is "on ne passé pas" [sic]. It seems that there weren't a lot of research and fact-checking on this.

From the same author, we have "The Zombie Survival Guide", and "Recorded Attacks", both taking place in the same universe as World War Z, which sometimes refers to the "guide", issued to civilians. If you're a SF or horror fan, you need to get those books now !

First trailer for the movie : youtube.com/watch?v=HcwTxRuq-uk

The movie looks like a very generic action flick, when it could have been an amazing story. :(