Aliens suck at music. And it’s not for a lack of trying. They’ve been at it for eons, but have yet to produce even a faintly decent tune. If they had, we’d have detected them ages ago. We’ve been scanning the skies for signs of intelligent life for generations, after all. And we’ve actually picked up thousands of alien anthems, slow dances, and ballads. But the music’s so awful that it’s always mistaken for the death rattle of a distant star. It’s seriously that bad. 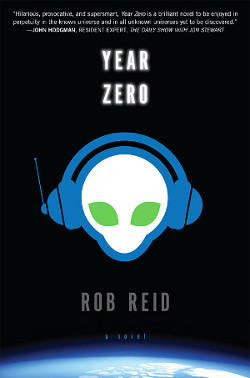 Here's the premise of this book, the first novel by Rob Reid : In world very similar to ours, we find out that every civilization in the Universe is a giant fan of music from Earth, and they have been copying it billions and billions of times without having the rights to any song.

These aliens are very respectful of the customs of each "refined art's" planet of origin, and since we have a culture of absurd fines for copying music, the Universe finds out in horror that they owe us most of the available wealth.

You may have seen Rob Reid during TED 2012, where he explained to us "copyright math" (link to the video).

The novel is a very fun read, even if it can be slow or weird at times. Some passages reminded me of Douglas Adams writing style, a great author to emulate when you want to do parody science fiction !

It turns out that Pugwash has Phluttr tweet him whenever FourSquare flags one of his Facebook friends within eight blocks of him at a Zagat-rated bar that has at least three stars on Yelp, and has not been tagged as “long line at door” in the past hour by other Phluttr’rs1—and I’d hit the tripwire.

I give this novel the grade :